In order to provide accompanying information regarding the land allocation in the forthcoming Local Development Framework of two areas of land to the south of Scroggs Wood, Kendal, Cumbria, Greenlane Archaeology was commissioned to carry out a desk-based assessment.

The site is close to the Roman fort at Watercrook, which is on the opposite (east) side of the River Kent, and Helsington Laithes, the manor house for Helsington, a settlement that is recorded in the Domesday Book. Also close to the site is Helsington Mill, latterly a snuff mill, but prior to that a marble mill operated by Webster and Holmes of Kendal, and perhaps earlier still the site of a mill mentioned in the 13th century. A large number of stray finds from the general area, of both Roman and medieval date, indicate that there is likely to have been some activity on the site in either or both of these periods, although the accuracy of the location of many of these finds is uncertain. A Roman pottery or tile kiln found on the west side of the River Kent, adjacent to what is now called Scroggs Lane, immediately to the north of the site, further indicates that Roman activity extended across to the west side of the river.

The site visit identified few constraints to further archaeological work and little in the way of disturbance to either of the pieces of land. They are both situated on the west side of an early river terrace, sloping down to the north-east, and are very undulating, comprising numerous drumlins. Some disturbance in the form of animal burrows along the field boundary dividing the two fields was apparent, although this also exposed a small piece of Roman pottery and a piece of iron working slag.

In view of the potential for archaeological remains to be present within the site area, it is recommended that further investigation be carried out. It is considered that the most efficient, least intrusive, and most cost-effective method at this stage would be geophysical survey, perhaps combined with further examination of aerial photographs. This would then enable the location of any below-ground remains to be identified and allow a more detailed consideration of the need for further work.

The full report is available on the Archaeology Data Service website: https://archaeologydataservice.ac.uk/archiveDS/archiveDownload?t=arch-700-1/dissemination/pdf/greenlan1-101734_1.pdf 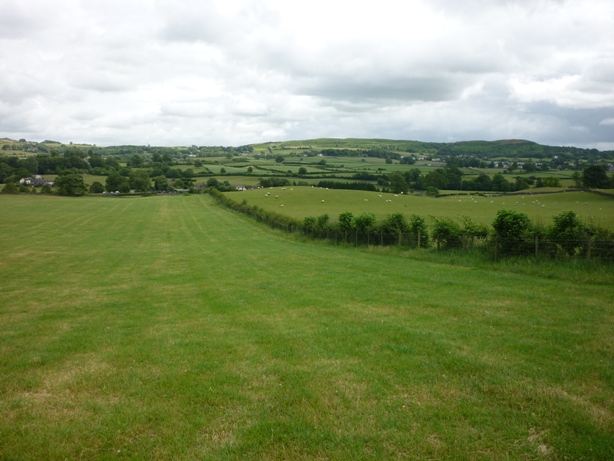