Prior to the submission of a planning application for a range of alterations to the Abbey House Hotel, Abbey Road, Barrow-in-Furness, Cumbria and its grounds Historic England was consulted. The hotel, which is a Grade II* Listed Building, is located within the precinct of Furness Abbey and therefore within a Scheduled Monument. Following this consultation it was requested that a heritage assessment of the site be compiled and as a result Greenlane Archaeology was commissioned to carry this out. This was intended to establish at an early stage whether there were likely to be any sites of archaeological interest within the proposed development area and assess how the proposals might affect these sites. The work for the project, including a site visit, was carried out in February 2017.

This demonstrated that according to the available map evidence the area was originally open fields, albeit within the precinct of Furness Abbey, but that there is a background of archaeological remains in the wider area dating from the prehistoric period onwards, including a number of finds of Roman date from within the Abbey precinct. The Abbey was established in 1127 and became one of the most powerful monastic houses in the country. The Abbey House Hotel was built to the designs of Sir Edward Lutyens in 1914 as a house for the director of Vickers shipyard and guests. It subsequently became an old people’s home and was converted into a hotel in 1985. It is evident that the construction of Abbey House will have caused some disturbance to the areas immediately adjacent to the building. Nevertheless, the location of the proposed overflow carpark as part of the current scheme is some distance from the hotel in an area less likely to have seen any disturbance and so an archaeological evaluation in this area was considered a suitable means of further assessment prior to any building work taking place and so Scheduled Monument Consent was obtained in order to facilitate this.

The evaluation comprised the excavation of two trenches, each approximately 5m long by 1.8m wide. Similar layers of topsoil and subsoil were noted above the natural in both trenches and, although no features were observed in Trench 2, a possible pit with an irregular shape was encountered at the south-east end of Trench 1 to the south of the area. This contained a moderate amount of charcoal spread throughout its fill, but no other finds from which to date it or infer its function. The colour and consistency of the fill of the pit was not readily distinguishable from the subsoil, and both the cut and fill of the feature had been disturbed by animal burrowing, which suggests this feature is likely to be relatively modern. A fragment of post-medieval glass was recovered from the topsoil in this trench, but of more interest is the fragment of Roman ceramic building material, probably roofing tile, recovered from the topsoil in Trench 2, which was otherwise void of archaeological finds and features. This adds to the growing list of stray finds of Roman date recovered from the immediate area, including a number of coins, but evidence has yet to be confirmed of settlement of that period nearby. While this fragment may have been brought to the site for use in an oven base or as hard-core the presence of a nearby Roman structure should not be ruled out. If structures of that date were indeed present within the grounds of the Abbey House Hotel, they may have been obscured on the surface or partially destroyed by construction and landscaping carried out in the post-medieval period; however, there is still potential for further finds of medieval and Roman date to be recovered from the wider area, which was also identified as a possibility by the earlier heritage assessment, and so further archaeological work in the area of the proposed car park, in the form of a watching brief, is recommended. 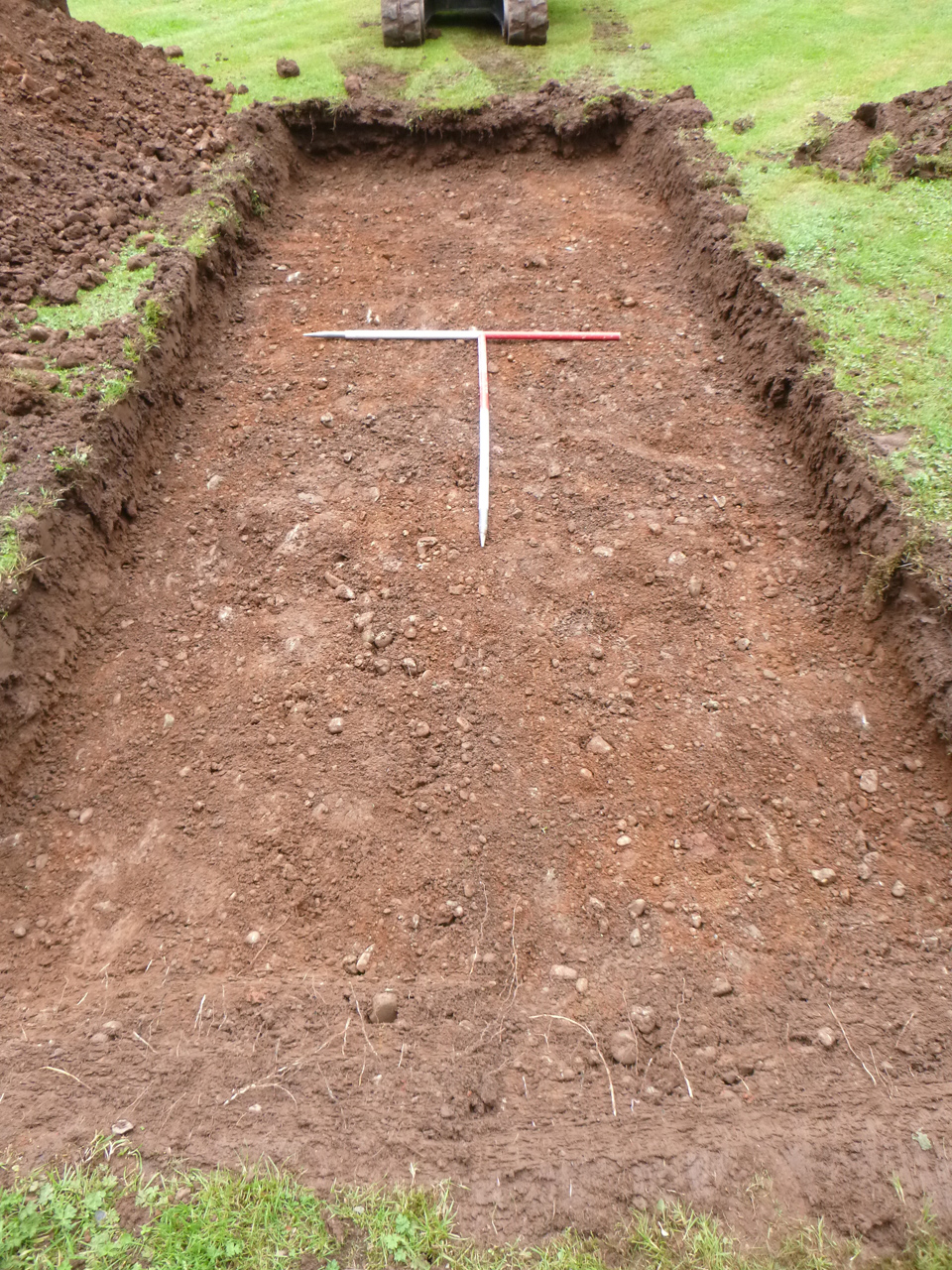 The natural exposed in one of the trenches 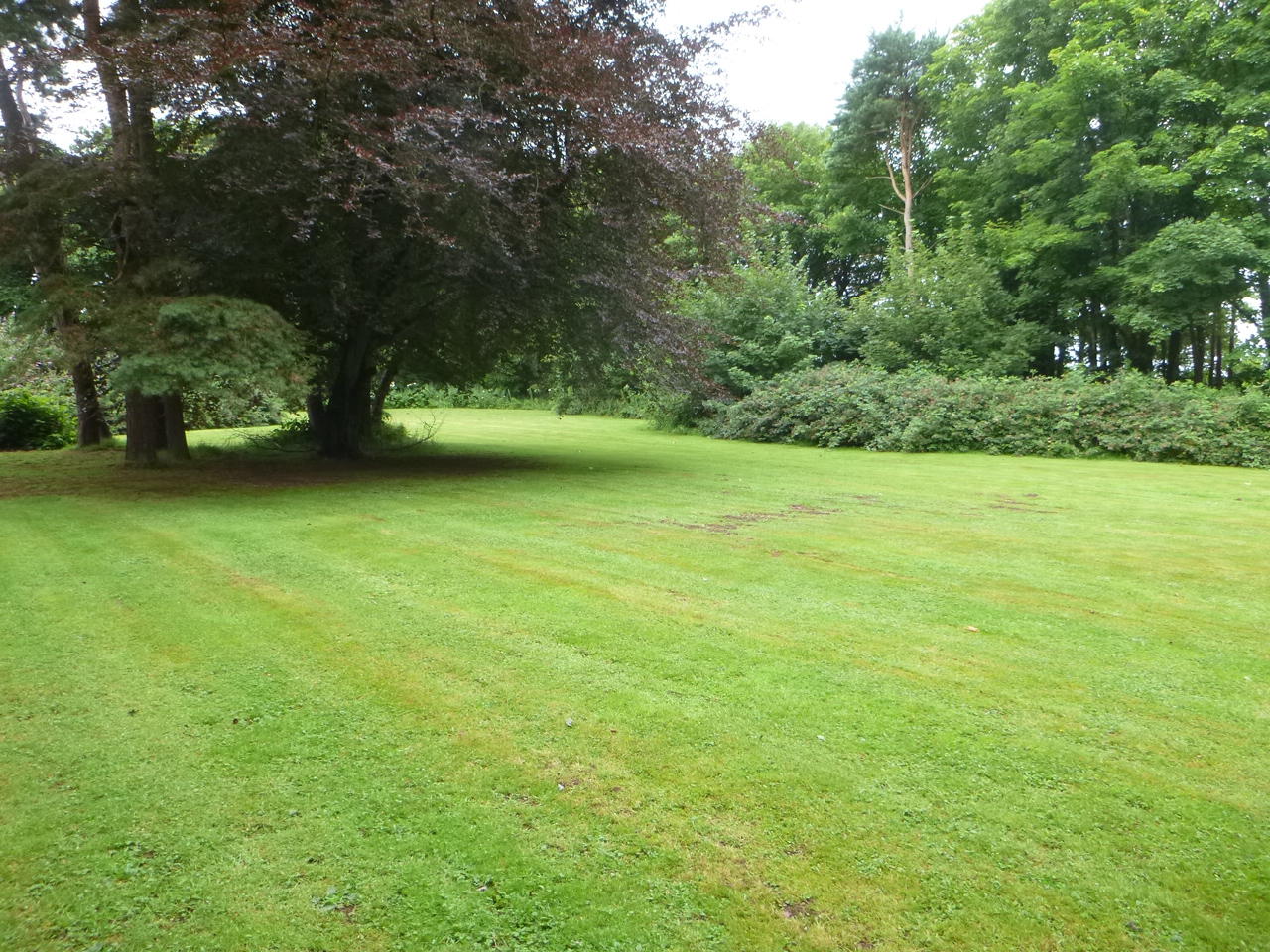