Following proposals to install a new electrical supply at Coniston Hall, Greenlane Archaeology was appointed by the client to carry out an archaeological watching brief on the groundworks, which was undertaken in February 2020.

While there is evidence for human activity in the wider area from the end of the last Ice Age onwards, Coniston Hall is considered to have medieval origins. It was probably the principal dwelling of le Flemings who acquired the manor of Church Coniston in the 13th century. It is not clear how much of what remains of Coniston Hall is medieval, although it has been postulated that the ruinous remains extending from the north-east end of the north-west corner represent the site of a medieval tower around which the rest of the building developed. The le Flemings seem to have abandoned the site by the late 17th century in favour of Rydal Hall and Coniston Hall was largely ruinous by the late 18th century. The earliest detailed map of the area, from 1732, shows the hall as comprising a large four-sided structure based around an open courtyard but it is not clear how accurate this is. Later maps and illustrations show that the site had reached approximately its current arrangement by the late 19th century, although there were evidently some substantial alterations in the 20th century.

The groundworks comprised the excavation of a single trench between the north-east end of the north-west elevation and the point in the road where the existing electrical cable is located. The line of the trench was expected to run across the projected lines of the wall of the possible tower at the north-east end of the elevation, but during the groundworks only a thin layer of overburden and a layer of probable demolition rubble containing largely 19th century finds was encountered and no foundations or evidence for a wall or floors were revealed. At the north-west end of the trench a wide deposit of green sand was encountered and this was found to be the fill of a large trench housing a ceramic drainage pipe, which was evidently 20th century in date.

Although relatively limited in scope and only revealing evidence of 19th century and later activity, the watching brief was quite useful in understanding the development of this part of the building. It seems to demonstrate that the lines projected by early antiquarian accounts are incorrect and that the north-east end of the north-west elevation did not form a tower. It is possible that the plan of 1732 is therefore accurate in its depiction, especially given an account of 1819, which describes wings on the north-west side having been recently removed at that time. The most efficient way to better understand the development of the building would be through more detailed investigation of the standing building. 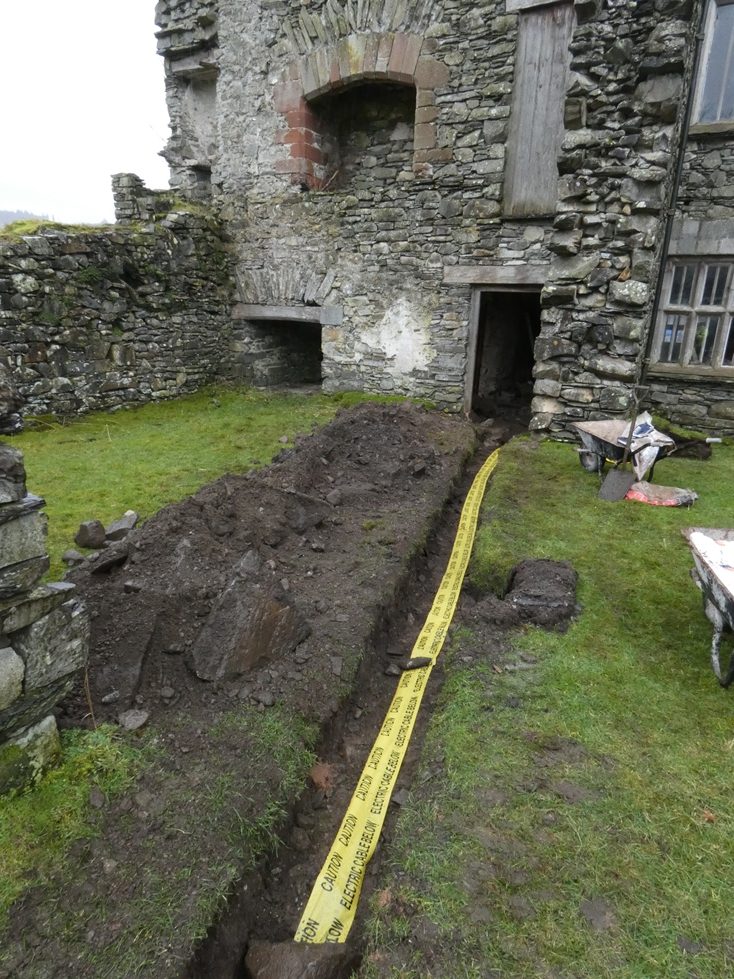