Following the submission of a planning application for the construction of student accommodation on land to the rear of 50-62 Church Street, Damside Street, Lancaster, a condition was placed for a programme of archaeological work. This followed on from an archaeological evaluation and watching brief, which recorded a considerable depth of deposits including in situ Roman, medieval, and post-medieval material, set within phases of riverine deposits. Greenlane Archaeology was commissioned to carry out limited excavation of the site, following the installation of piled foundations.

The site is situated on the north side of Lancaster, close to the main focus of the Roman vicus, on the edge of the river line as it was during the Roman and probably medieval periods, as revealed during the previous phases of work and on a nearby site to the west.

The excavation yielded Romano-British, medieval, and post-medieval finds, which is to be expected given the long history of this part of Lancaster. Most of the material came from mixed deposits as much of the site has been heavily disturbed to the depth of the current excavations (particularly towards the outside of the site) by later, post-medieval activity, some of which probably relates to the 18th century development of the wider quayside and a later phase of backfilling and redevelopment along Damside Street in the 19th to 20th century. Possible riverine deposits, which contained post-medieval and residual Romano-British and/or medieval material, were encountered at the base of two trenches.

The coarse ware Roman pottery from the site dates from the 3rd to early 4th century, but some of the finer Samian ware is earlier and broadly dates to the second half of the 2nd century to the early 3rd century AD. That the assemblage includes fine and imported wares probably results from the Roman military presence at Lancaster, however, the assemblage is more consistent with a basic rural site than what might be expected from a site within a Roman town.

The more central area was seemingly less intrusively developed in later periods and an in situ timber drain was exposed and recorded in this area. The result of tree-ring dating on one sample indicates that the drain was 12th century or later, which is also suggested by associated pottery finds. The drain cut through a possibly Romano-British deposit and the bulk of the material from this period was from this area, which is partly a result of the fact that excavation in this area was slightly deeper to accommodate a new lift shaft. The timber boards, roundwood stakes, and axe chippings in two trenches had been preserved by burial in a waterlogged deposit but were not diagnostic of any specialist woodworking practice. The woodworking technology used would be consistent with a medieval date, broadly 10th to 15th century AD but the tools attested would also have been available from the Roman period. The in situ drain demonstrates the potential for medieval features to be preserved in this part of Lancaster. More finds and possibly also features of Romano-British date could also be present, although no features of this period were encountered during the current excavation.

The clay tobacco pipe assemblage most notably includes a rare stamp stem with the rolled mark of Elizabeth Savage; it is only the second site to produce a stamp of this type, raising the possibility that this maker may have worked in the Lancaster area for a time during the 18th century.

The results of this work will be published in Contrebis and the full report will be made available on the Archaeology Data Service website. 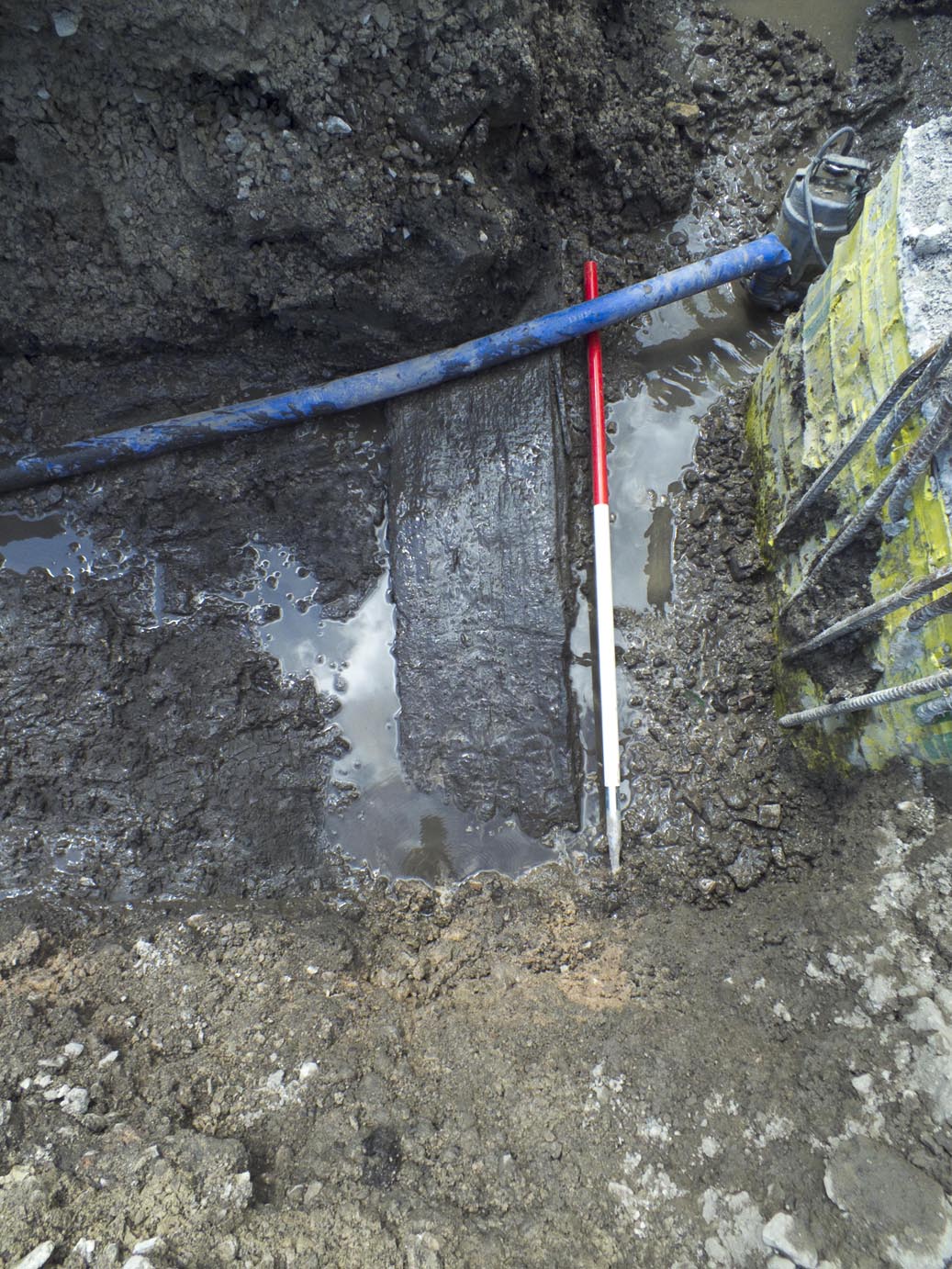 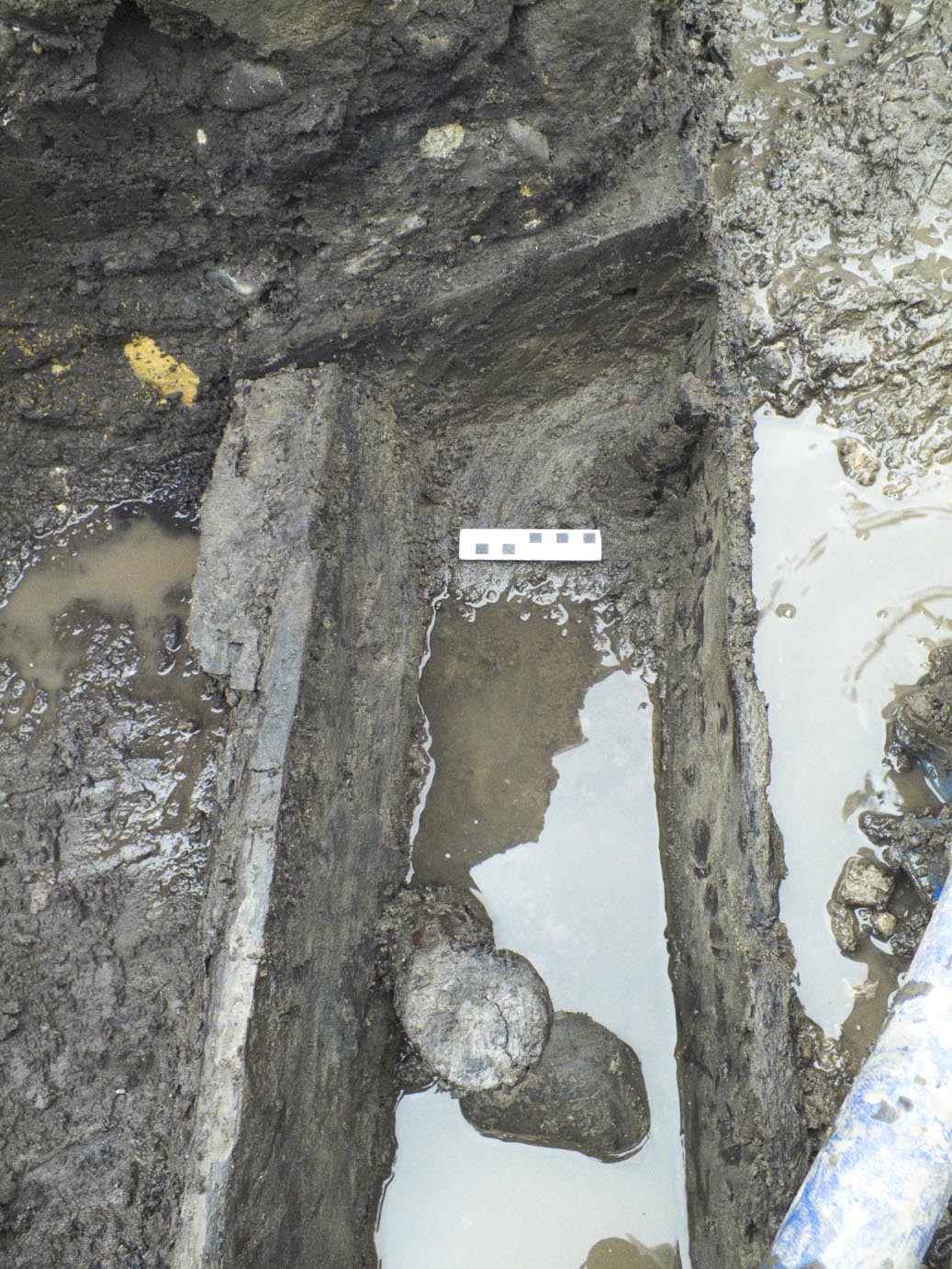 Construction of the timber drain 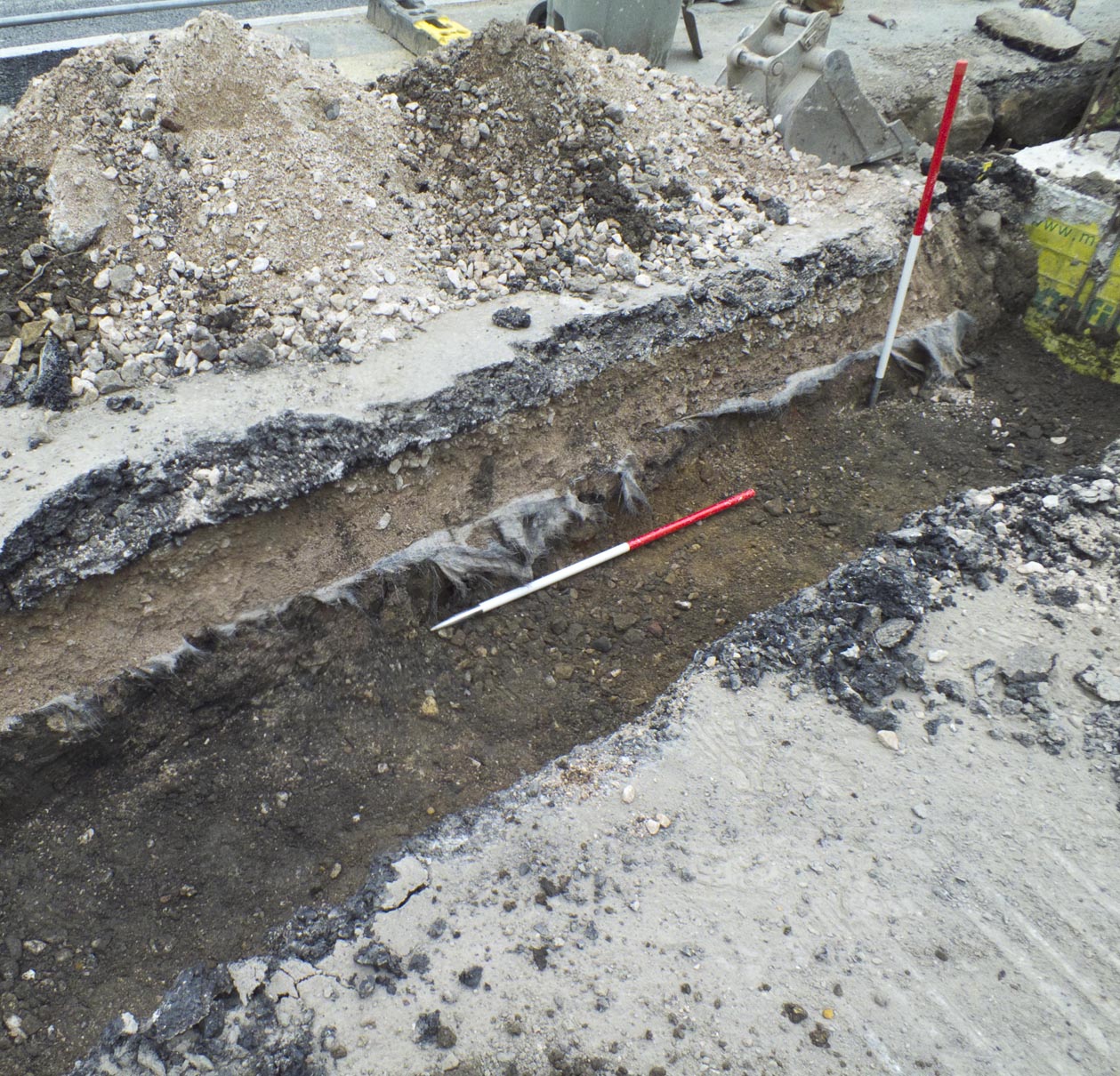 General view of one of the trenches 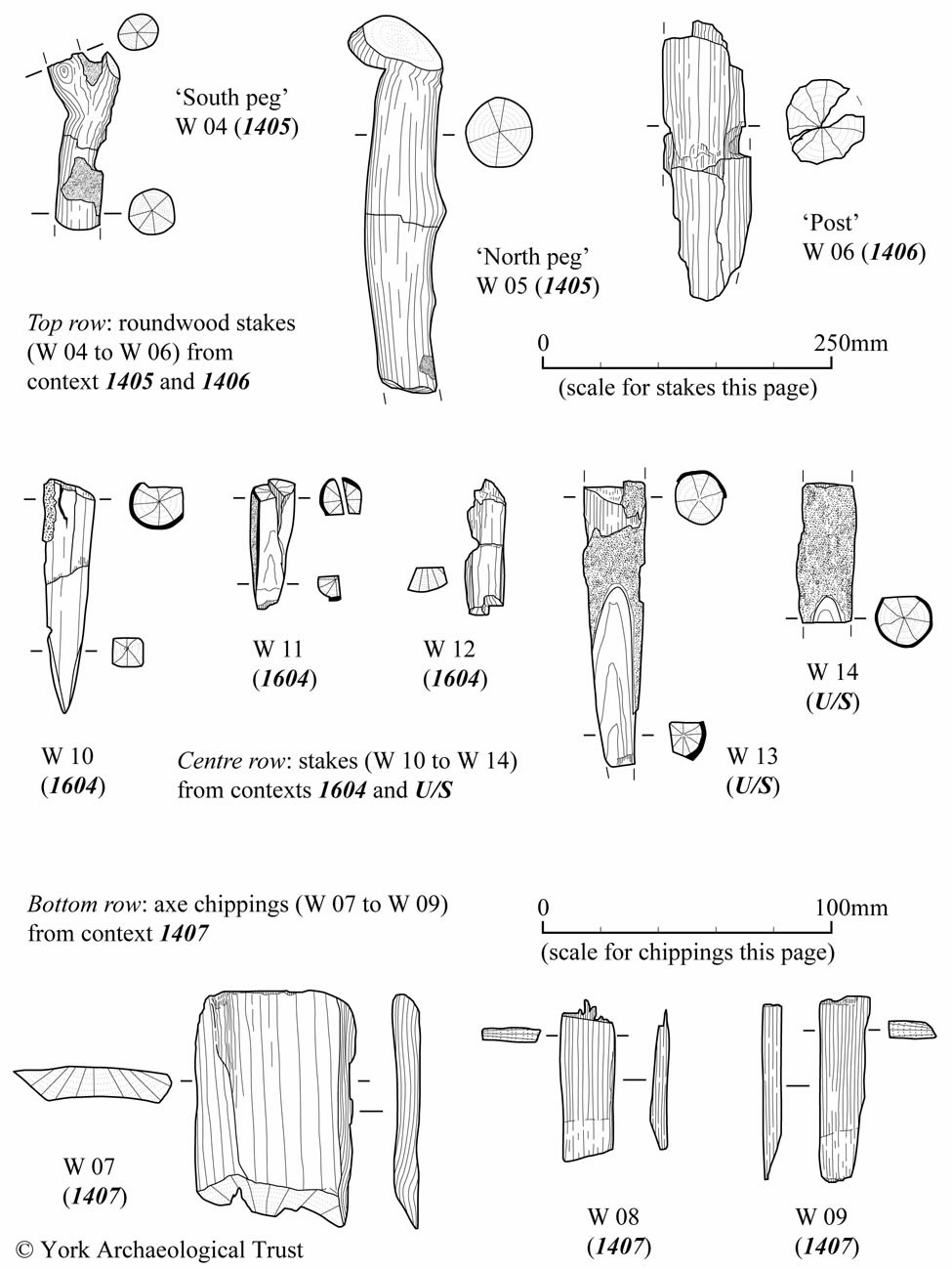 Detailed drawings of the stakes and chippings (© York Archaeological Trust( 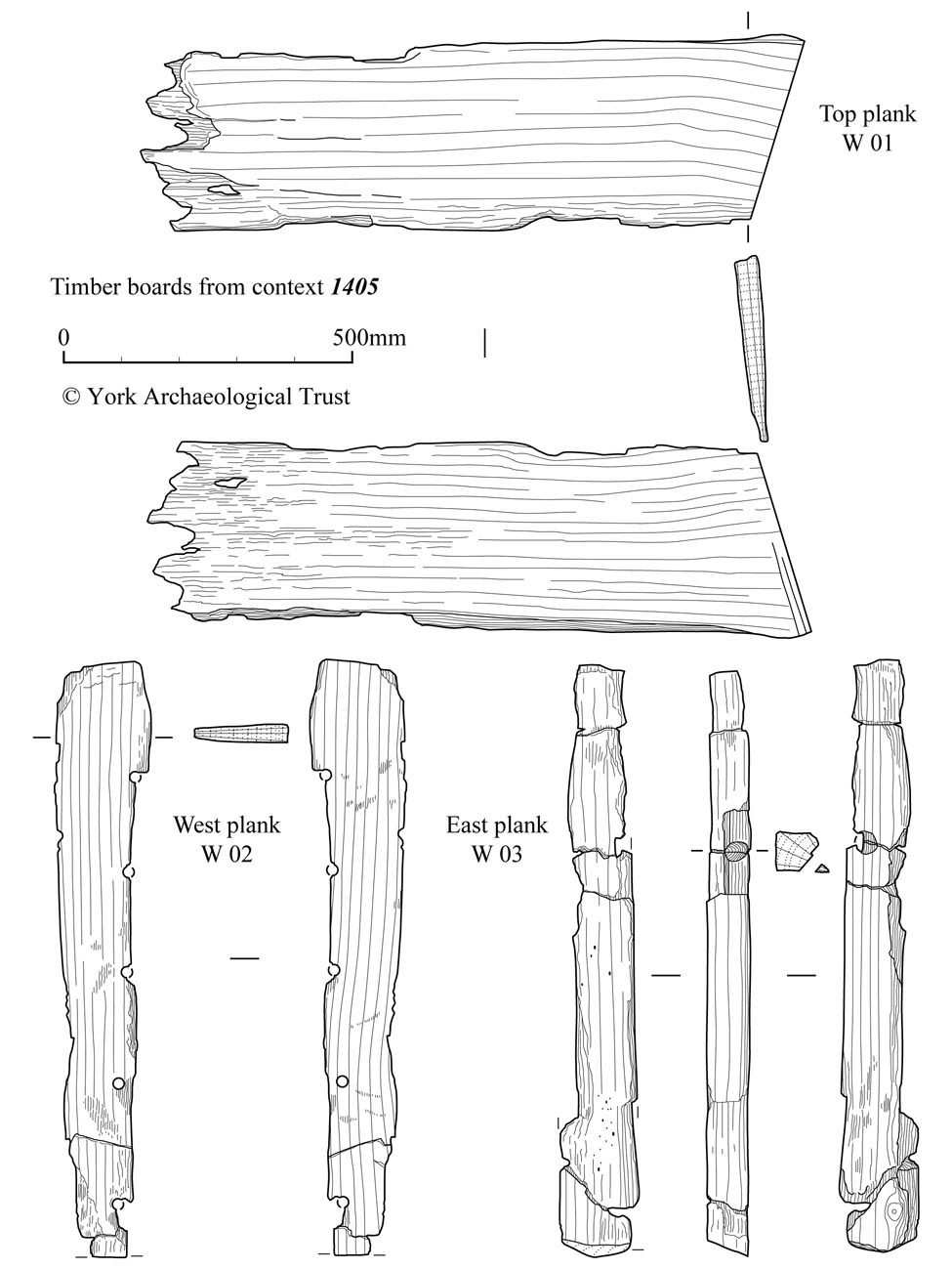