Following submission of a planning application for the construction of a new garage and associated access road on land at Fairfield Lodge, Cartmel, Cumbria a condition was placed on the Scheduled Monument consent for an archaeological watching brief on the associated groundworks. Greenlane Archaeology was commissioned to carry this out, the work being carried out in July and August 2021.

A preceding desk-based assessment had shown that the site formed part of a single field to the south of Fairfield Lodge since at least the early 19th century, and had seen very little change. It is, however, located relatively close to Cartmel Priory church and therefore the core of the medieval priory, and is within the priory’s precinct wall, which still remains to the north. The wider area has evidence for human occupation from at least the end of the last Ice Age. Of particular significance to the site is the uncertain nature of Roman activity on the Cartmel Peninsula. Earthworks were reported in the 19th century as having existed in the area around Fairfield, thought to be associated with an area to the north known as ‘Castle Meadows’ and assumed to be Roman in origin, although these were levelled during the construction of Fairfield. The priory at Cartmel was founded at the end of the 12th century and while there has been considerable speculation about the development of its core, archaeological and other investigation has been limited until relatively recently.

An archaeological evaluation was carried out prior to the submission of the planning application comprising the excavation of two trenches. The northernmost of these (Trench 2) revealed no archaeological features, although a collection of medieval pottery was recovered from the topsoil. The south-western trench (Trench 1) revealed a range of features and deposits, including an apparently deliberate raised area of redeposited clay and gravel, either side of which was a deposit containing some slag. There was also a pit of 19th century date containing building rubble, all of which was covered by a layer of stony topsoil, which was probably brought in to level the lower ground either side of the raised area.

The watching brief revealed a range of additional features, all of them probably or definitely post-medieval in date. These comprised a substantial ditch following the line of the boundary to the north, which probably represented a ha-ha, and a linear ditch, most likely a former field boundary. Service trenches for both gas and electricity were also present, cutting through earlier deposits, and the raised area of redeposited clay and gravel was found to have been truncated outside of the area of the original evaluation trench. More significant was a layer of redeposited material or subsoil in the area of the new driveway, which contained a collection of medieval pottery and an assemblage of ironworking residue. Analysis of this confirmed it as smelting waste from the bloomery process, which had been reprocessed from its original location, and it is another example of such material recovered from the north-west part of the priory precinct. Other finds of interest include two unusual marked clay tobacco pipe stems.

The results add additional knowledge to the understanding of the development of Cartmel Priory, which has been growing in recent years due to various pieces of archaeological work. In particular it demonstrates the connection to the iron industry, with smelting activity evidently having taken place in the north-west corner of the Priory precinct. It is recommended that the ironworking residue be subject to further analysis, ideally alongside that already discovered from nearby Priory Gardens. 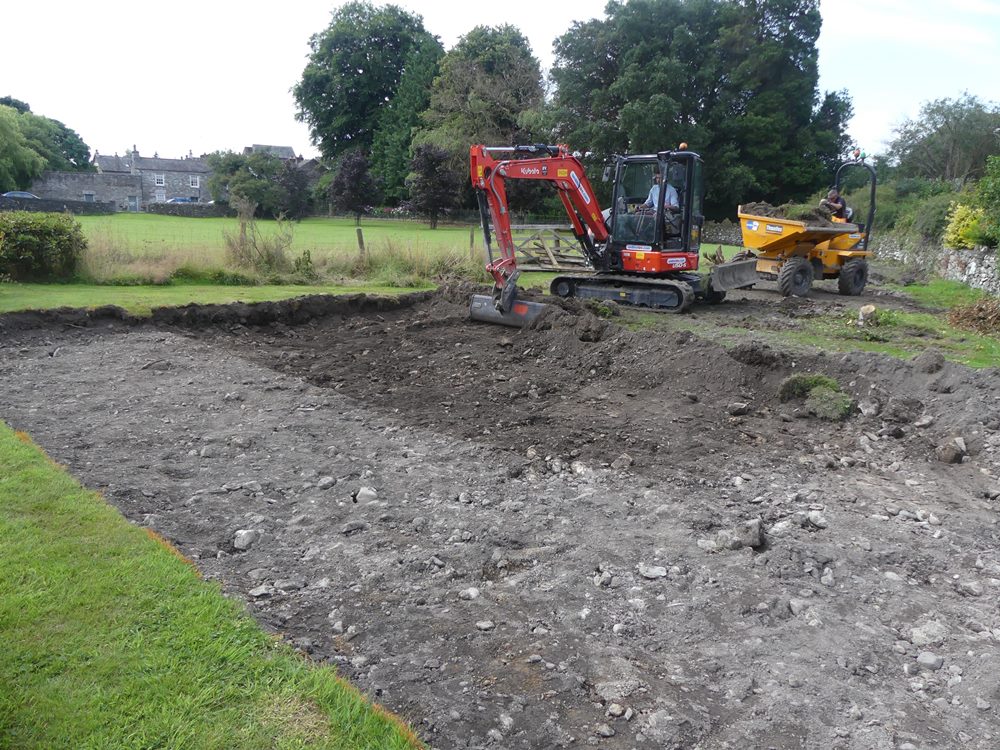