A watching brief was carried out within the courtyard and between the potting sheds and the greenhouses to the west of the main house at Levens Hall, Kendal, during the course of groundworks associated with the installation of two biomass boilers, storage hoppers, and associated fittings. The Hall is Grade I Listed and has at least 14th century origins with significant additions being made in the 16th to early 19th centuries. Unfortunately, the area between the potting sheds and the greenhouse was very disturbed and contained only 19th and 20th century finds most likely associated with the construction of the potting sheds, however, the discovery of a possibly medieval well in the courtyard is another interesting addition to the history of the Hall.

The courtyard comprises a fairly level cobbled surface, which is criss-crossed by limestone gutters and lined with slate flags and its appearance has changed little from its depiction on the earliest Ordnance Survey maps. A fairly straightforward sequence of deposits was exposed beneath the flags of the boiler house to the west and across the courtyard to the east and several stone-lined culverts were observed close to the junction of the limestone guttering. The culverts were built from courses of angular limestone blocks and the base was lined with slate. They were often capped with very large angular sandstone blocks some of which had evidently been reused; a piece of a scooped limestone drain had been upturned and reused to cap one section.

Excavation in the north-east corner of the courtyard exposed a neatly constructed well just a short distance in front of the windows in the south elevation of the café. It was constructed from regular courses of angular limestone blocks and had an internal diameter of 0.95m. Up to 0.03m thick of firm, gritty, brownish-yellow clay packing material had been used between the courses of stone and it was capped with slate. It was open to approximately 5m deep, with the bottom 1.5m filled with water. It is potentially medieval in date, but since no finds were directly associated with it its actual construction date is uncertain. Fragments of late 12th to 14th century medieval pottery ware types were recovered near to the kitchen-wing, but these are thought to have been residual based on their size and level of abrasion. These dates encompass the earliest known period of construction at the site and potentially relate to the period of construction of the tower in the 14th century, although they could equally indicate that the area was occupied earlier in the medieval period than previously thought.

Overall, the assemblage is conducive with domestic activity associated with the Hall, including small concentrations of marine shell and animal bone, a small quantity of which showed butchery marks. The majority of the rest of the finds from the courtyard included red earthenware, tin-glazed earthenware, mottled ware, clay tobacco pipe fragments, ceramic building material (including roof tiles), and glass, and generally date from the late 17th to early 18th century. This is confirmed by the dating of a clay tobacco pipe bowl fragment with a spur stamped ‘IG’, which was probably produced between 1650 and 1680. The pipe is a rare example of a provenanced Yorkshire product from Cumbria and provides a new die for the Halifax pipe-maker John Gill.

Although the broken roof tiles cannot be dated closely, the context from which some of them were retrieved potentially dates from the same period and it is not inconceivable that the roof tiles were broken and deposited around this time. This coincides with the date of construction of the south wing and repairs made to the kitchen-wing when the house was owned by Colonel James Grahme; there is known to have been fire damage to the kitchen-wing at the east side of the courtyard in 1703 and it is not inconceivable that the tile fragments relate to this damage or perhaps are associated with repairs carried out to the Hall shortly thereafter.

The full report is available on the Archaeology Data Service website: https://archaeologydataservice.ac.uk/archiveDS/archiveDownload?t=arch-700-1/dissemination/pdf/greenlan1-111353_1.pdf 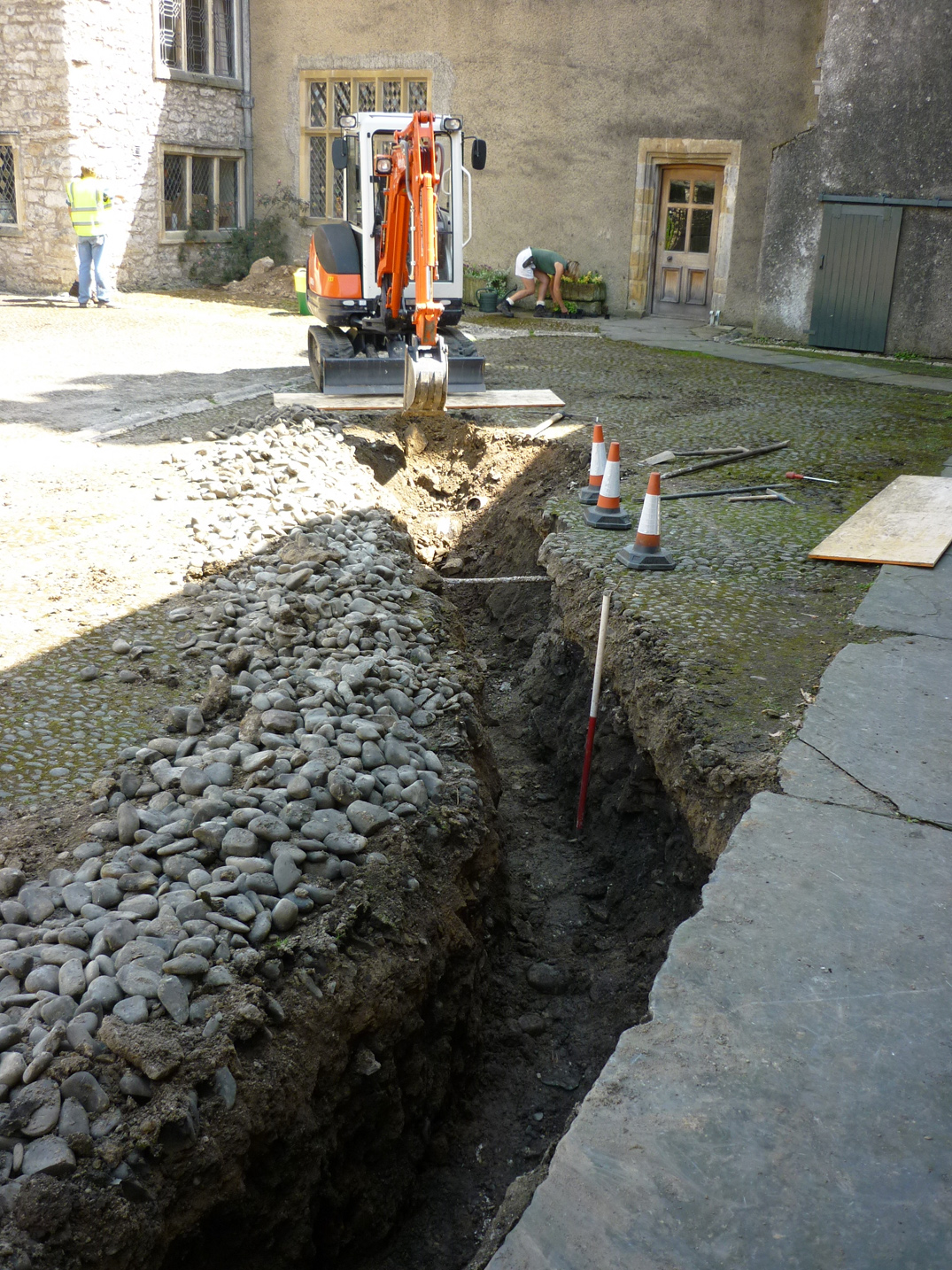