Following the submission of a planning application for various alterations to Oxendale Hall Barn, Osbaldeston, a condition was placed on the decision notice following consultation with the Lancashire Archaeological Advisory Service requiring that a record of the building be made beforehand to better understand its historical development and significance and that groundworks associated with the development be monitored. Following the provision of a project design by Greenlane Archaeology the building recording was carried out in September and the watching brief was conducted in October 2017.

The barn is Listed Grade II* and a date of c1600 is suggested for its construction and the nearby hall is dated 1656. A tithe map is not available for this area and the 1848 Ordnance Survey map is the first to accurately show the hall and barn in detail by which time it had a number of attached outshuts and during the late 19th and early 20th century it was clearly extended and associated buildings were constructed nearby.

The building recording revealed that the core of the building comprises a timber framed structure supported by four full height cruck trusses, including a closed one against the north elevation, and a tie beam truss to the south. Ritual marks on two of the cruck blades and associated evidence suggest that there was originally a wagon doorway to the west, opposing that to the east, which would have provided access to a large threshing floor. Slots for timbers extending to the west perhaps represent the position of an early aisle, predating the later stone structure, but these are only present in three of the posts and are irregularly spaced, perhaps indicating that they actually relate to a later extension or extensions that were removed. The timber barn was subsequently clad in stone in a number of phases, initially probably intended to support the south end where this had failed, but later to massively enlarge the barn and provide additional cattle housing. This too was later modified but not extensively, perhaps because other buildings were added to the complex to the west, and the building also saw some modification in the later 20th century after it had ceased to be used for agricultural purposes.

A small pit was uncovered close to the east cruck of Truss 4 during the course of ground works inside Room 2, but it contained no finds and was of unknown date and function. Finds from inside the barn were all post-medieval in date and an 18th or 19th century date is suggested for a series of stake holes at the north end of the same room, which could indicate that it was partitioned at one time, perhaps for keeping livestock. Much of the floor area had been disturbed, however, by more recent activity.

There were no finds or significant features recorded in the area excavated to the south side of the barn. Some features and deposits from this area may relate to a structure built in approximately this location between 1910 and 1930 and subsequently demolished. A layer of rubble may have derived from this structure, but no courses of brickwork remained, and plastic sheeting and the presence of flexible plastic drains show that much of the material removed during the course of the ground works was of modern derivation.

The building represents an important structure, primarily because of its surviving timber framing, but also because of the evidence for how this was subsequently modified. Much of this was in order to provide further housing for cattle, which culminated in its footprint being almost doubled in size. 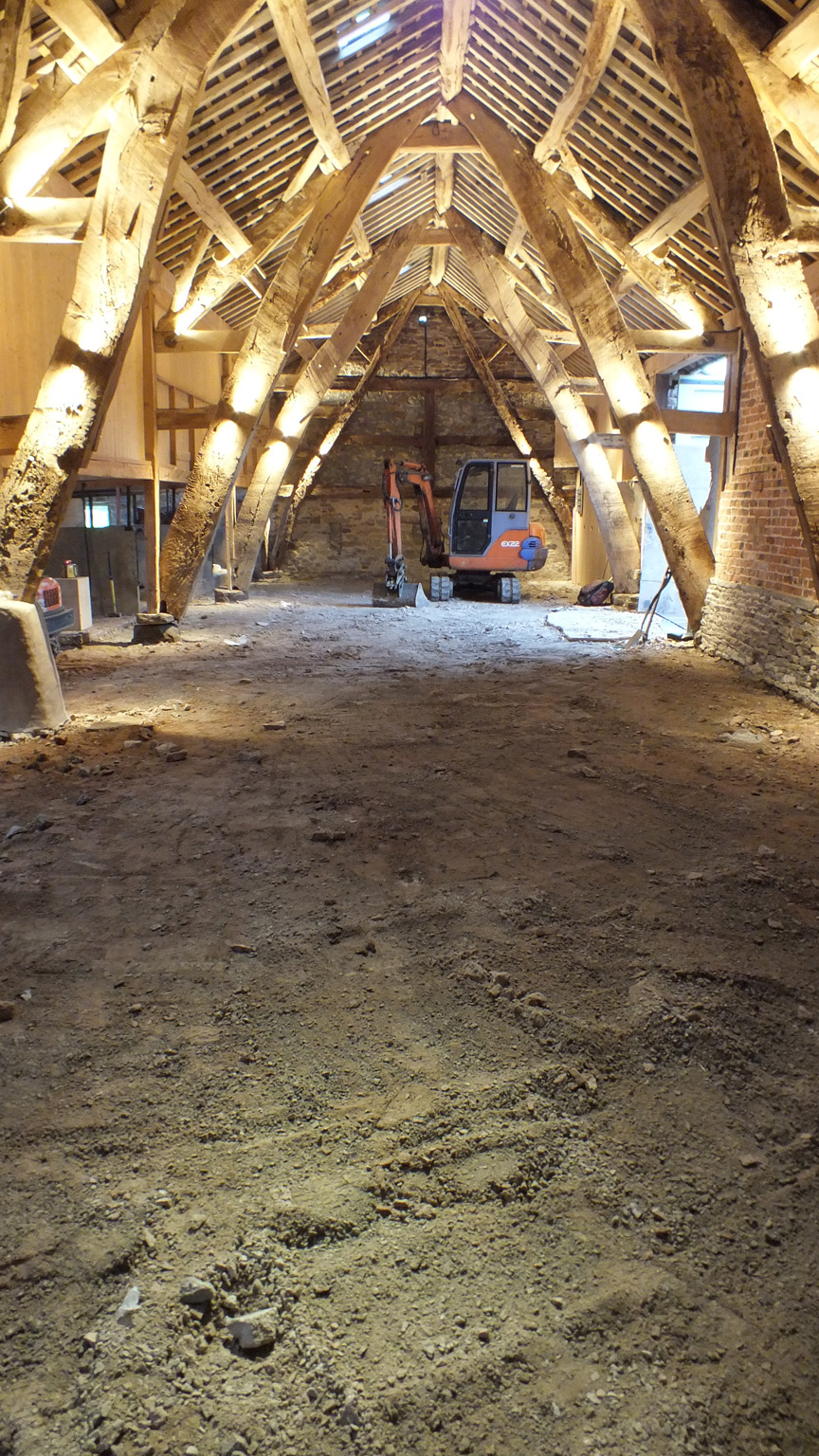 Removal of the floor inside the barn 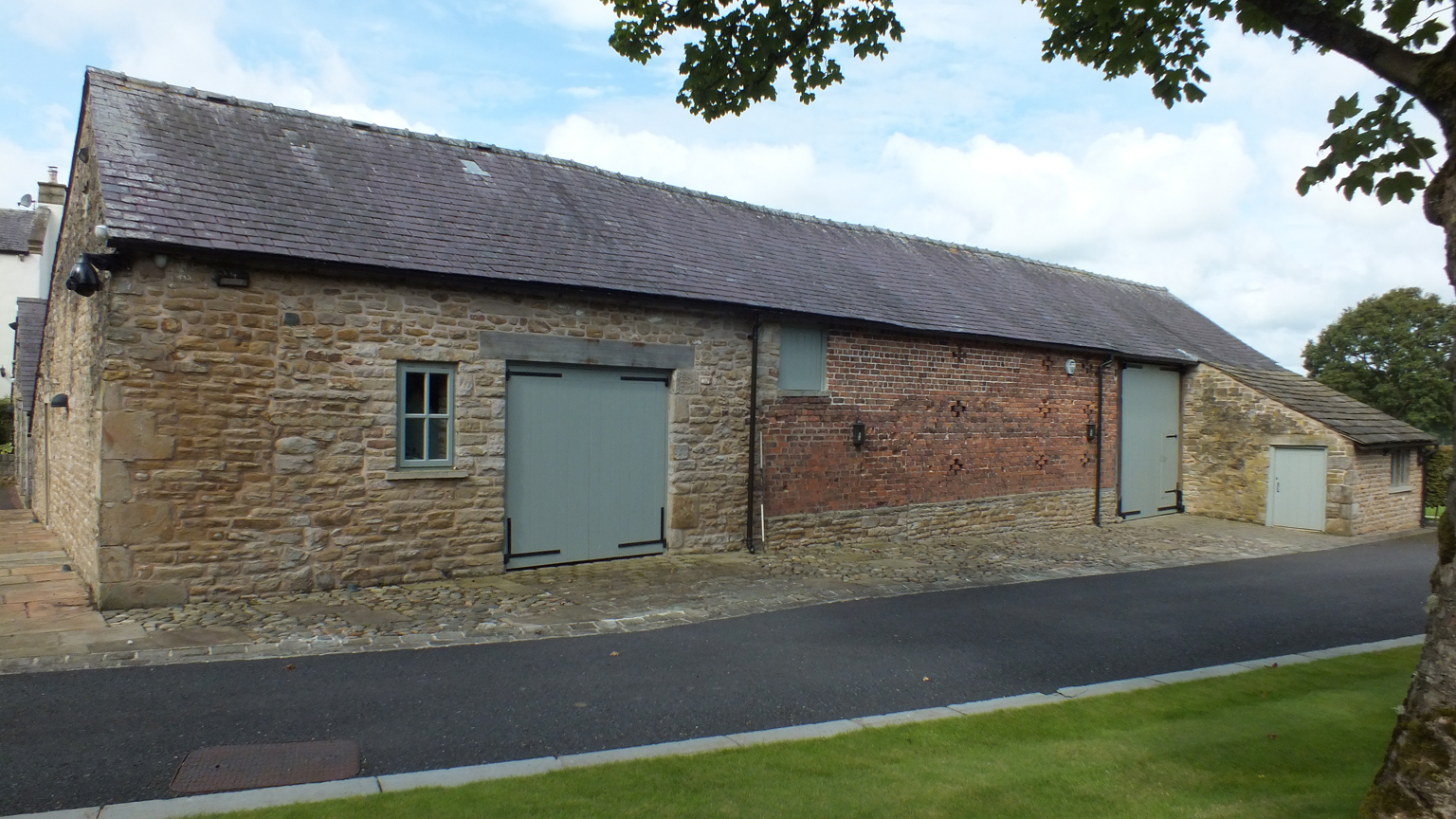 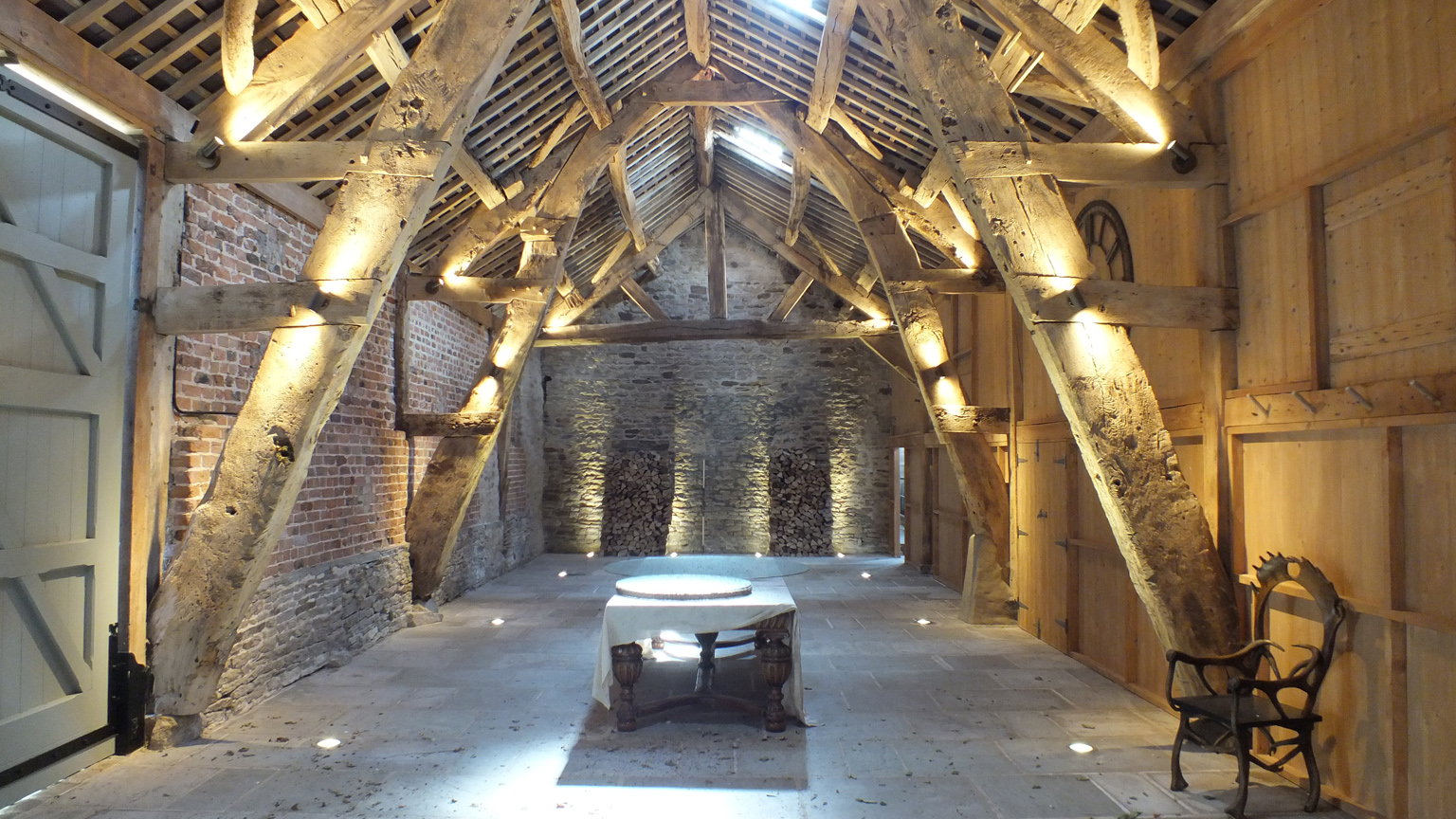 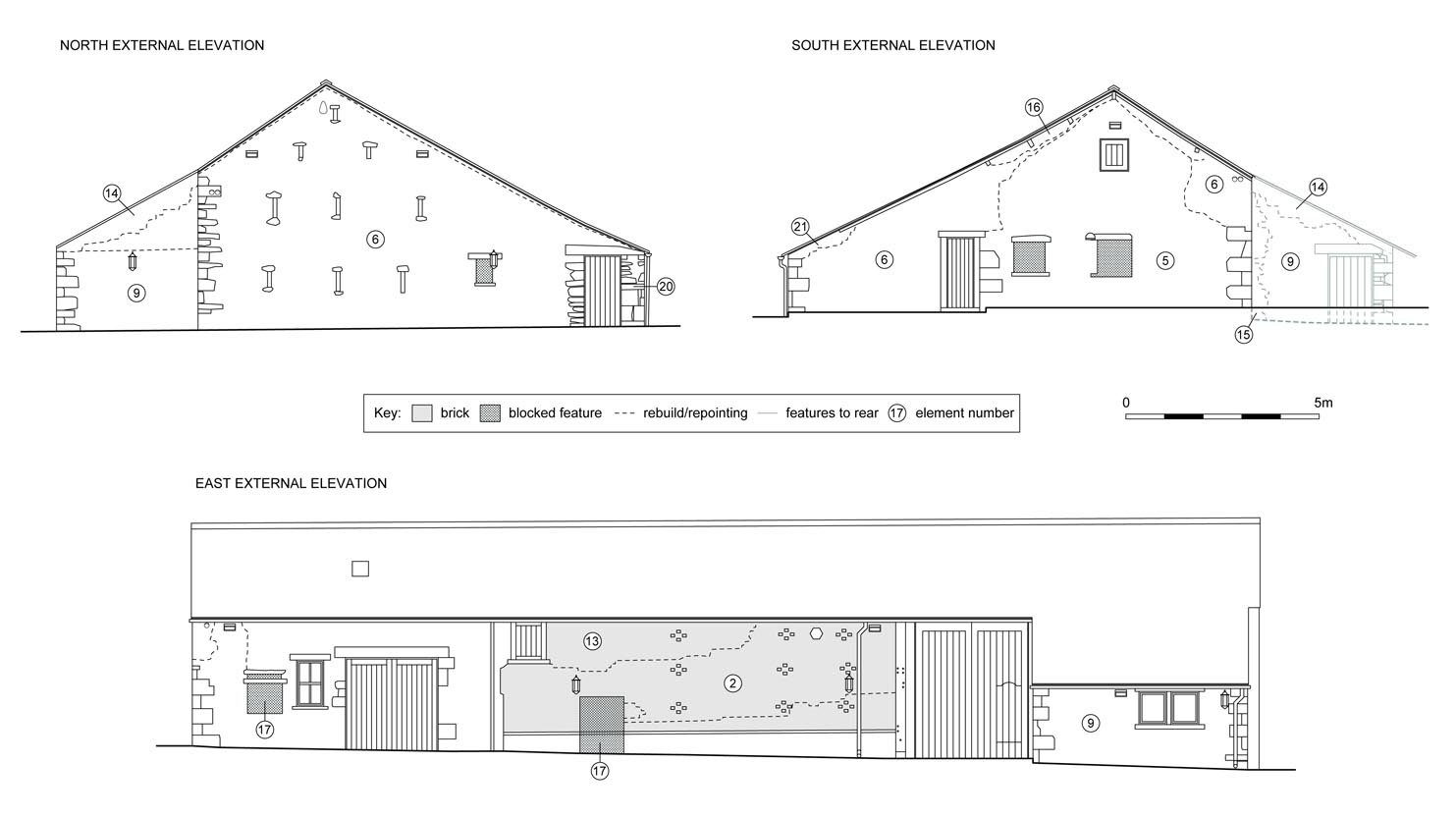 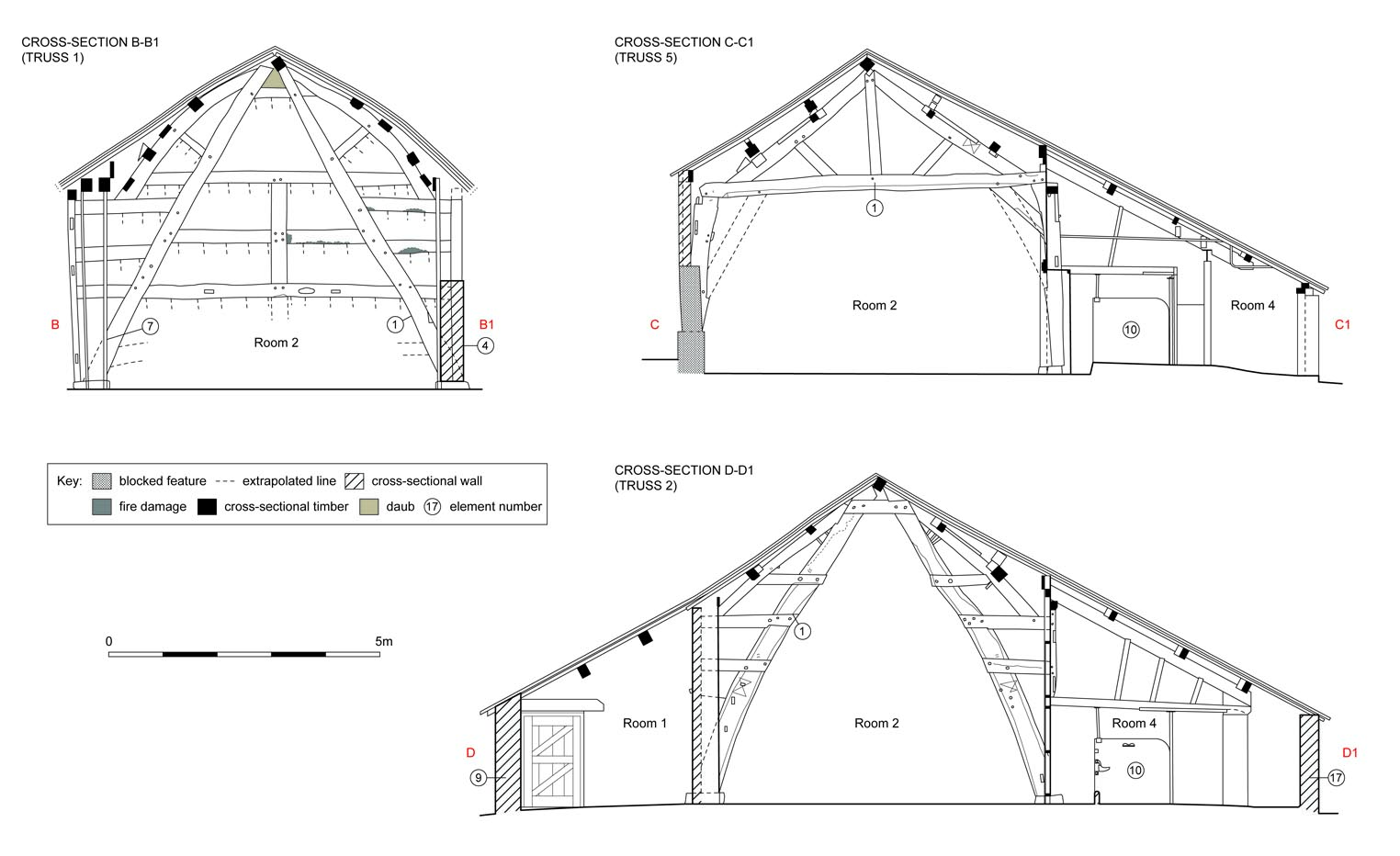