As part of proposals for the construction of an extension to the north side of the nave of the Priory Church of St Mary and St Michael, Cartmel, Cumbria, Greenlane Archaeology was commissioned to carry out an archaeological evaluation. This was primarily carried out inside the footprint of the proposed extension and comprised the excavation of three trenches within this area. A fourth trench was excavated to the north where it is intended some extant grave covers would be moved in order to accommodate the new extension, and a fifth trench was excavated alongside part of the footpath where the ground level might be lowered in order to improve accessibility.

The site’s history is dominated by the presence of the medieval Priory Church, which originally formed part of the Augustinian Cartmel Priory, which was established in the late 12th century. The documentary history of the priory in the medieval period is not detailed, although a postulated understanding of the development and arrangement of the site has been established through various pieces of evidence. Significantly it is thought that the cloister was moved from the south side of the church to the north in the 14th century. The church is the only part of the priory that survived the Dissolution to the present day and there is considerable documentary evidence for renovation and alterations to it from the early 17th century onwards, with a particularly large programme of work in the late 19th century.

The evaluation revealed features and deposits of archaeological interest in all five trenches, with deep, vertically-sided, linear features present in Trenches 1 and 4 and shallower linear features in Trenches 1, 2 and 5. In Trench 3 a substantial deposit of dumped demolition material, containing large amounts of human bone, was also found, and in Trench 4 a shallow pit containing a large amount of domestic rubbish, essentially the remains of a midden, of late 18th or early 19th century date, was found.

Two residual pieces of medieval pottery and 10 fragments of floor tile of probable medieval date were recovered, but all of the features and deposits encountered were apparently post-medieval in date. The form of the deep vertically-sided features in Trenches 1 and 4 is suggestive of robbed out walls. In the latter case the dating evidence shows that this must have taken place in the late 18th or early 19th century, but it is plausible that the walls were part of the medieval priory. The shallower linear features were typically filled with very loose stony material suggestive of demolition rubble, but these may have been created to form wide drains along the sides of the Priory Church. The thick deposit in Trench 3 also appeared to be essentially demolition rubble and perhaps derived from attempts to dispose of material removed during one of the phases of renovation inside the church. Dating evidence from these features indicates that they cannot have been created before the late 19th century.

It is arguable that the probable robbed wall lines discovered in two of the trenches represent the line of the cloister when it was moved to the north side of the church in the 14th century. There is enough space to accommodate a cloister of fairly standard size; the alignment of the features shows that it could not have been perfectly square or rectangular but seems to have been constructed to respect the boundary wall to the north-west, which presumably already existed in some form. What would be perhaps most noteworthy about their removal is that this would have meant that they were still visible on the surface as late as the early 19th century. The reason for such thorough robbing is not clear, if this is indeed what occurred. Perhaps it was because the area was due to be used for burials, although none of those now present pre-date the middle of the 19th century. Plans for the creation of drains along the outside walls of the church are recorded in documentary sources as early as the 1820s, and there are also references to substantial amounts of material being moved as part of reflagging the floor, which would fit to some degree with the other features. 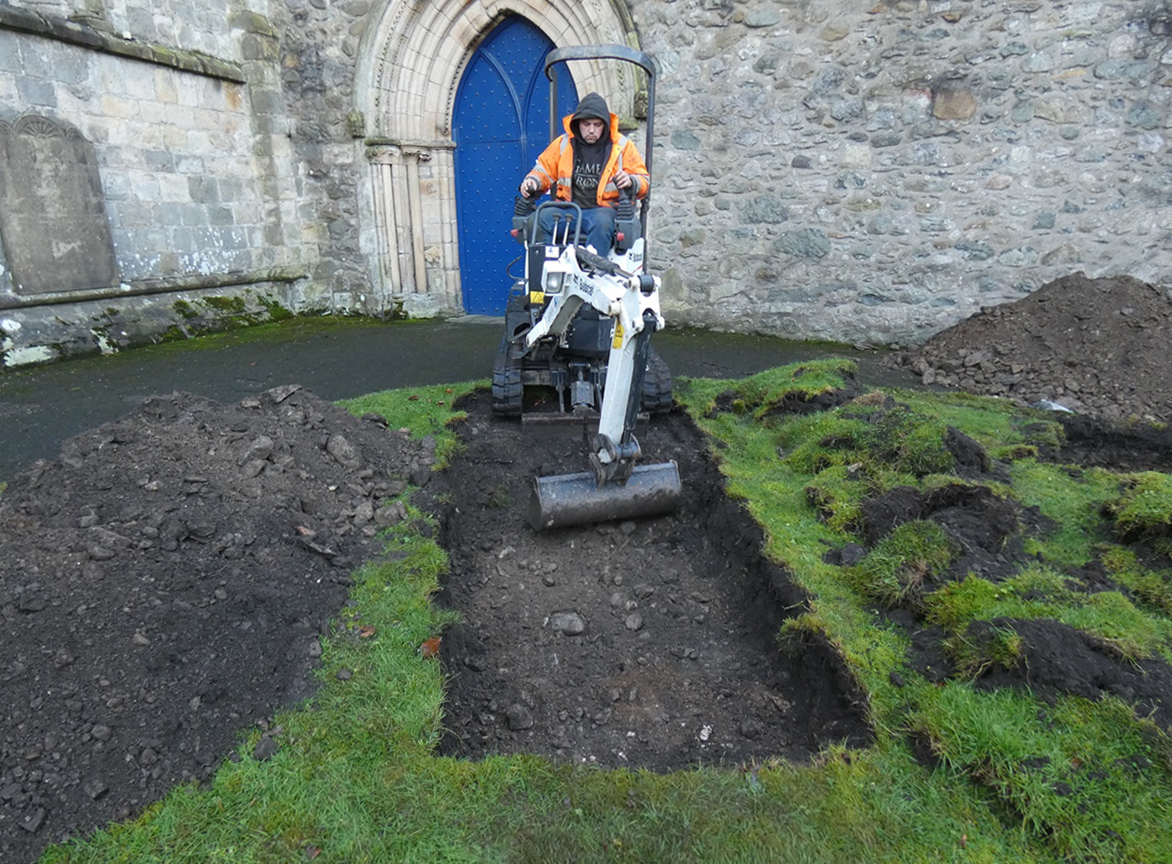