An archaeological watching brief was carried out during groundworks associated with the construction of a new garage/workshop and glasshouse at Priory Gardens, Cartmel. Priory Gardens is included as part of the Scheduled Monument comprising a number of elements within the precinct of Cartmel Priory, which was established in the late 12th century. The watching brief was carried out over six days, one or two days at a time, between the 17th June 2014 and the 24th April 2015. Excavation within the footprint of the new glasshouse and garage/workshop was monitored as was the later removal of a disused fuel tank and excavation of service trenches to the north and east of the new garage. It was also noted that various detailed stonework elements were incorporated into the section of the boundary wall which was taken down along Priest Lane ahead of the construction of the new glasshouse. This included a voussoir from a Gothic window arch, possibly of 12th to 14th century date, which was presumably reused from the Priory. It is not uncommon for structural elements to be reused in this way, especially in some of the older buildings around Cartmel, and this fragment was reinstated into the wall when it was rebuilt.

Excavation within the footprint of the new glasshouse and along Priest Lane recovered fragments of industrial residue relating to medieval ironworking or smithing tentatively dated to the 13th to 14th century on the basis of associated pottery finds. Ironworking debris was also found during the evaluation and small scale excavation carried out at the site in 1998 (Wild and Howard-Davis 2000) and these latest finds further suggest that a bloomery operated on the site within what would have been the outer court of the medieval priory.

Excavation within the footprint of the garage/workshop revealed a blackish silty layer, which dated to the medieval period and contained abundant animal bone, much of which had been split longitudinally, presumably to extract the marrow. The deposit also contained a relatively significant amount of fish bones, primarily marine species, but also perch. The south side of the area revealed a large stone-built structure, which is thought to have been a post-medieval sawpit, which corresponds to some extent to structures shown in the area on 19th and early 20th century mapping. From the finds contained within a backfilled deposit from inside the sawpit it seems that it was backfilled in the late 19th or early 20th century before being built over.

The watching brief provided a further opportunity to examine the site, which is of considerable archaeological and historical interest and has already been the focus of an archaeological evaluation and small scale excavation. This report reconfirms many of the original findings of that earlier work but adds important additional information regarding the scale of iron working in the area and the degree to which it became used for dumping rubbish. This rubbish in part comprised the presence of midden material, which provided important evidence for the nature of the diet of the inmates of the priory. 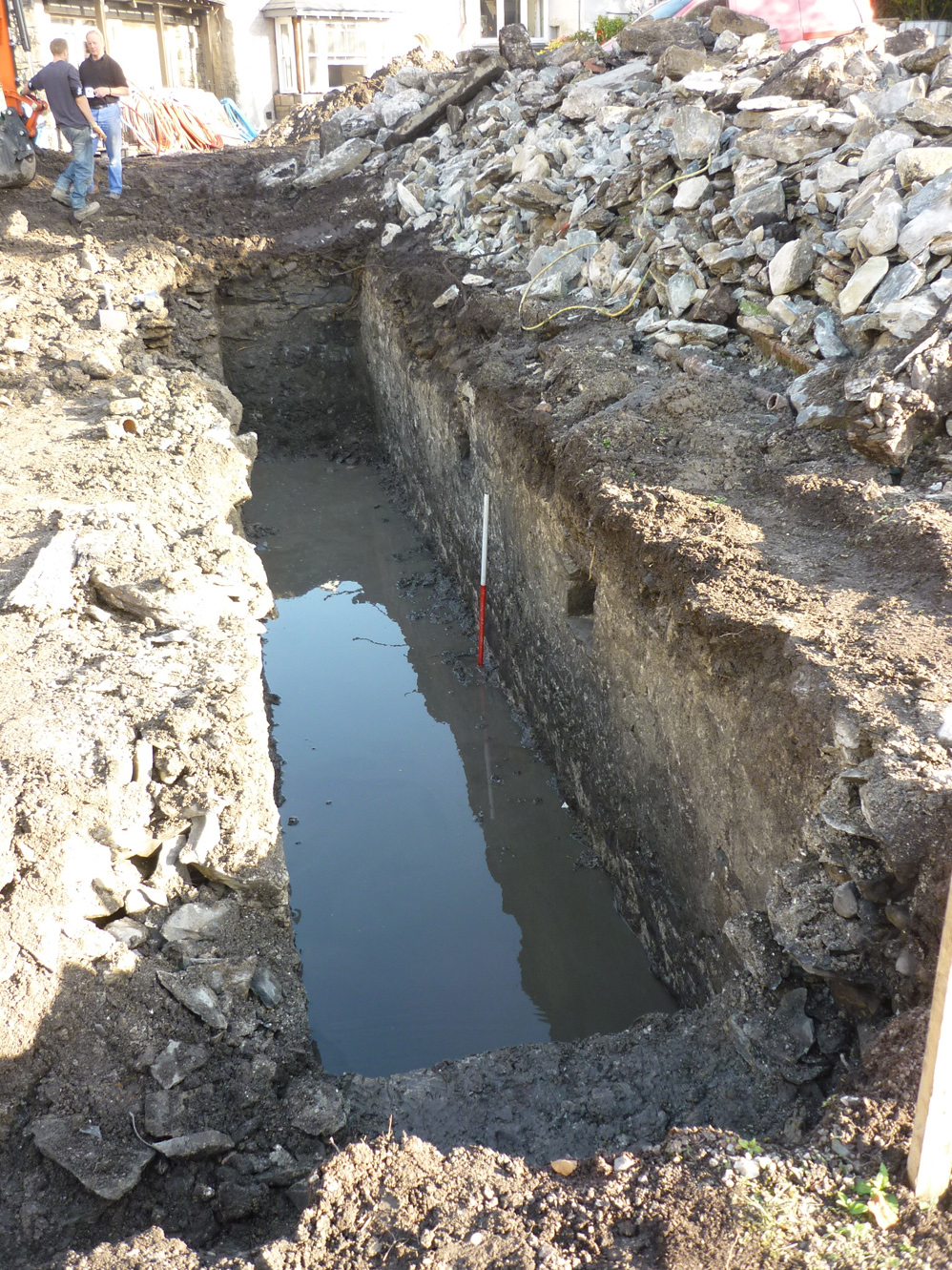 View of the south elevation of the sawpit 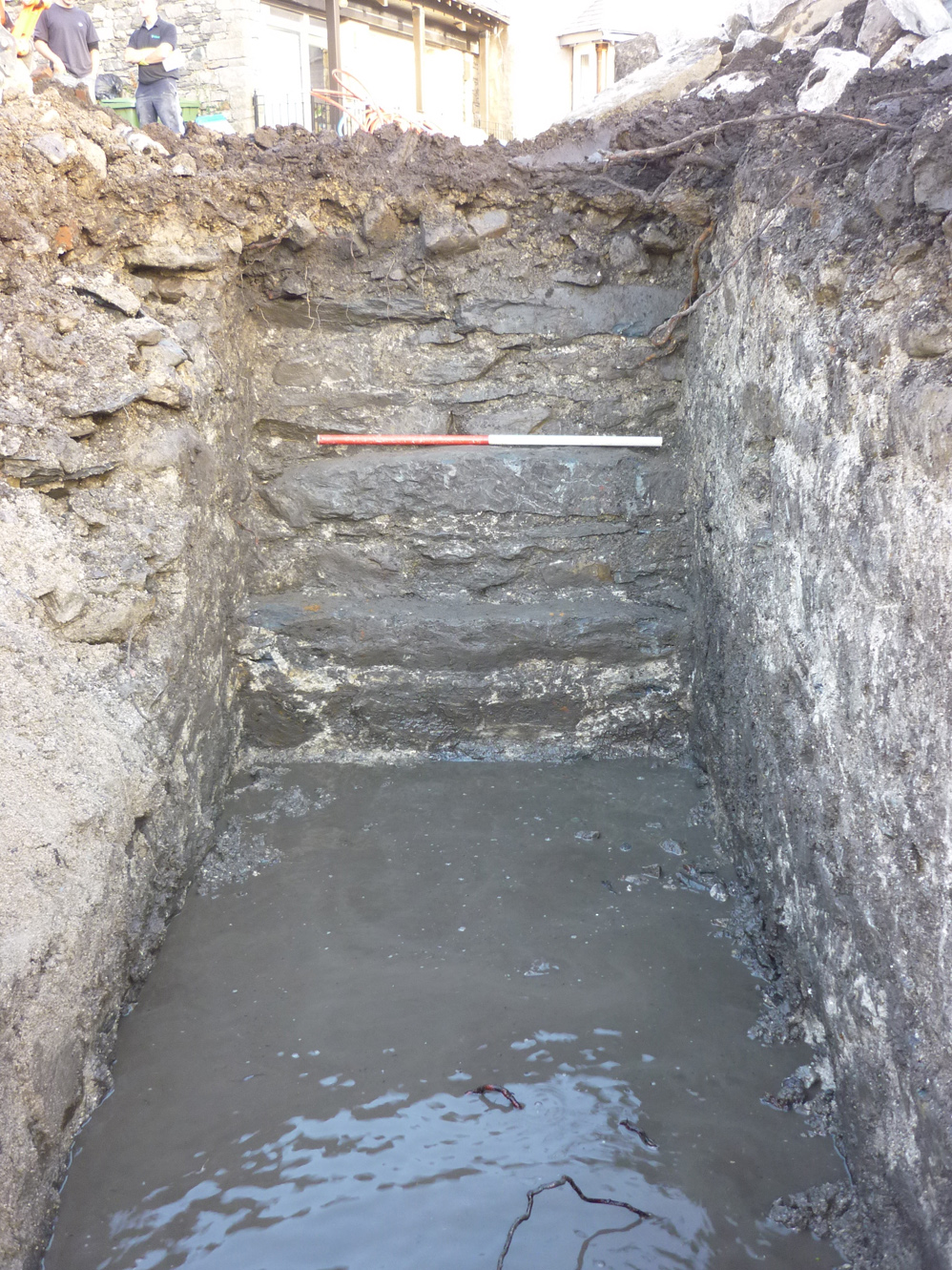 Steps at the east end of the sawpit 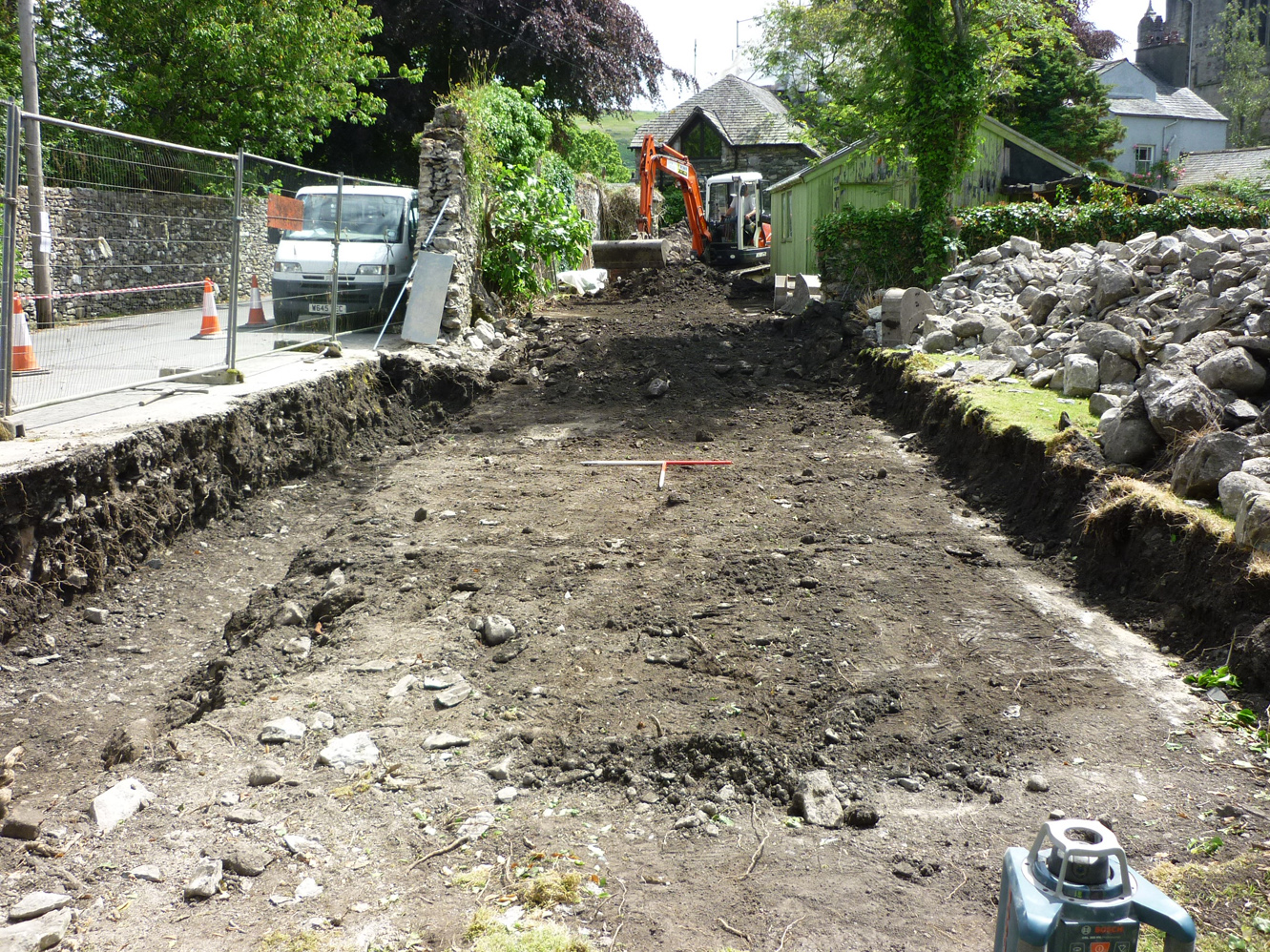 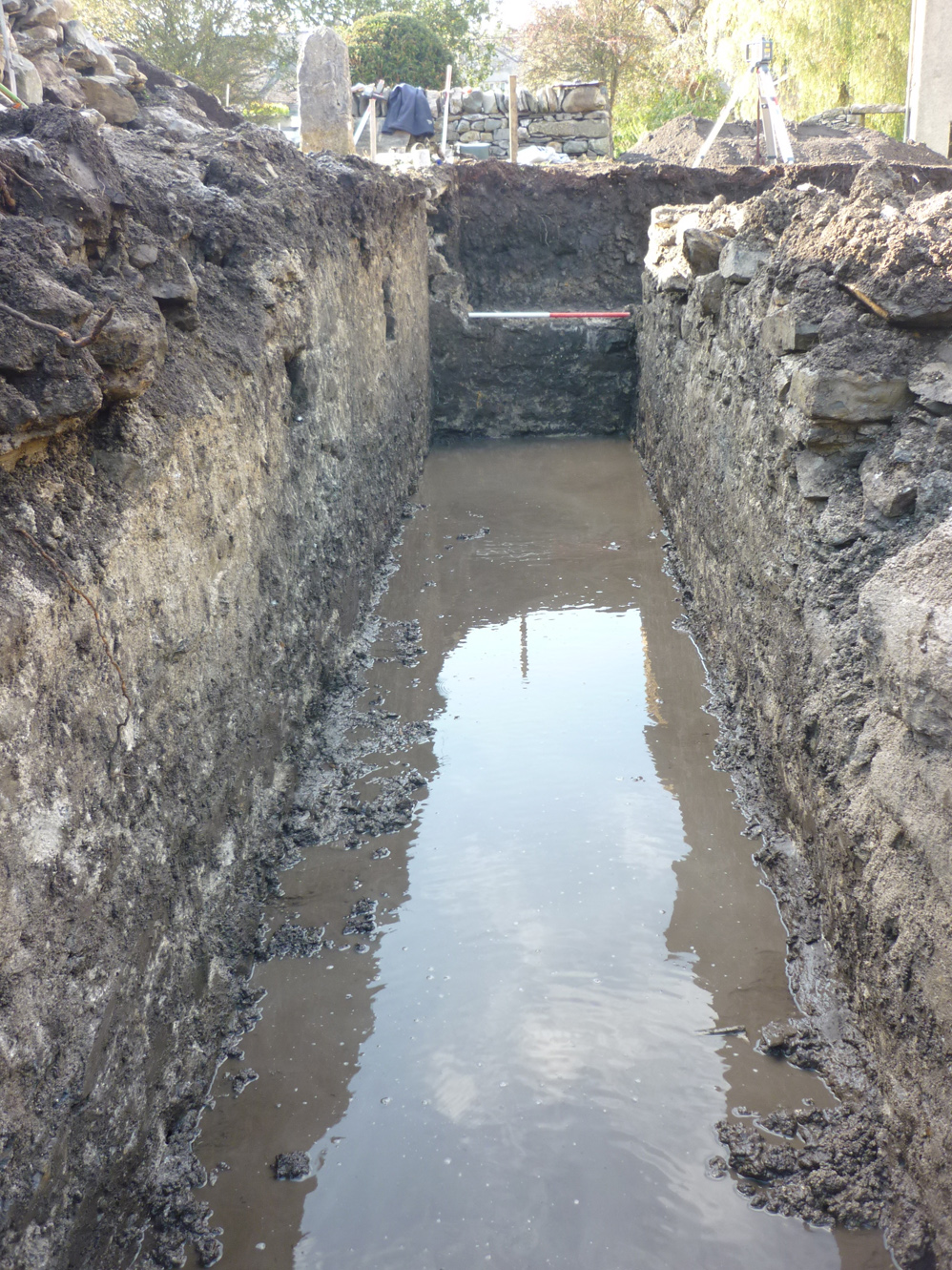 View of the sawpit from the west end 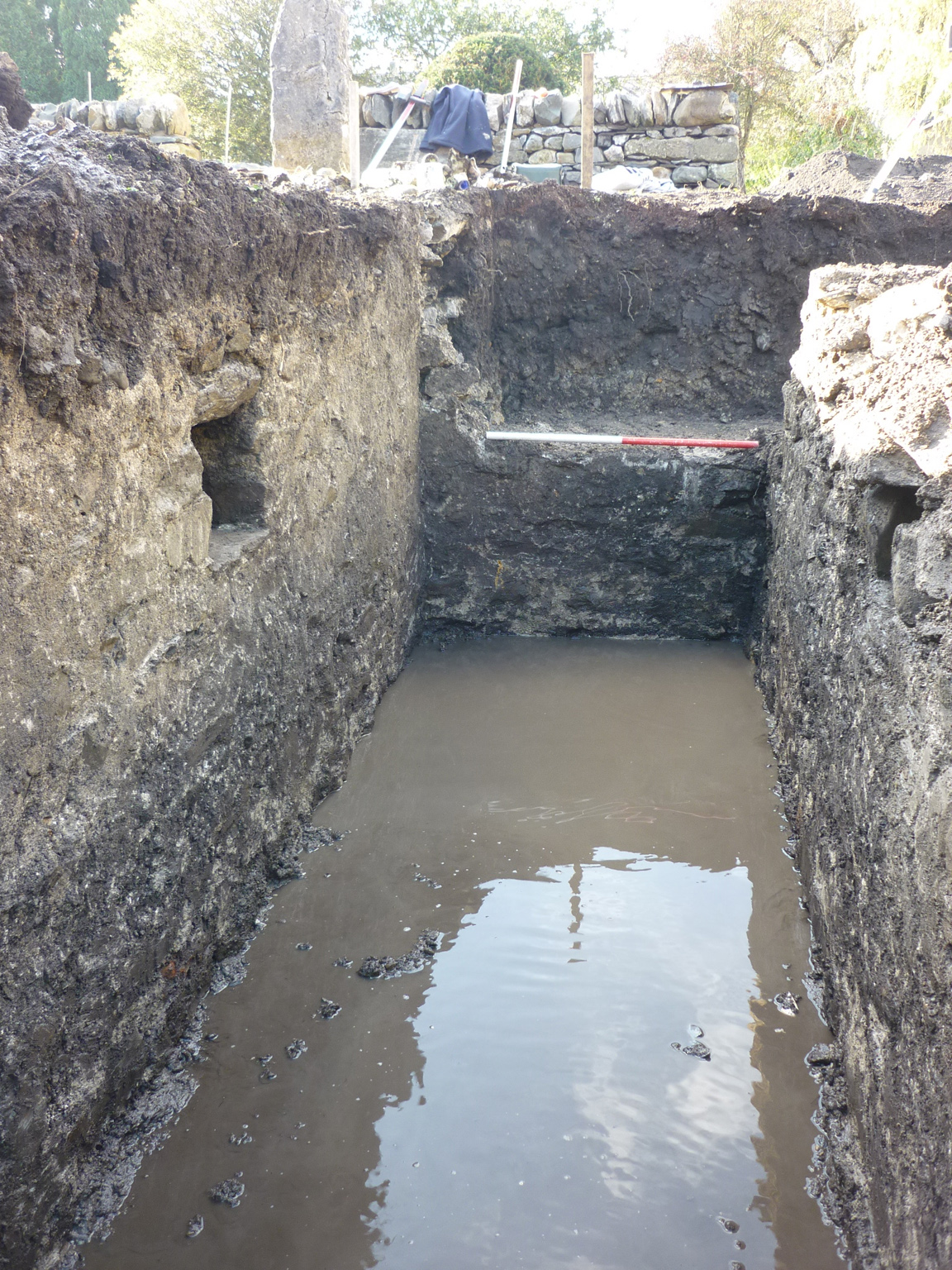